Chris Calarco on Music for Yoga 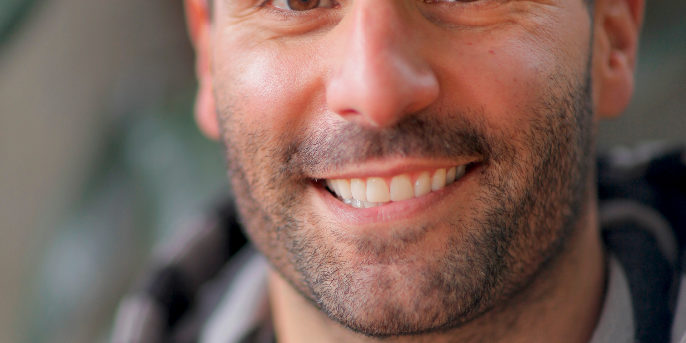 Chris Calarco shares with Jenna Lynne Roberts about his explorations into music for yoga classes.

How did you become a yoga teacher?

I was practicing yoga a lot when I was a mental health therapist.  I decided that much of what I was gaining in my yoga practice would be a great supplement to the work I was doing with kids and families. So I took a yoga teacher training with the hopes of moving into a yoga-psychology type of practice.

That got derailed. I realized that yoga was the thing that was giving me the most joy in my life. I didn’t think you could be a yoga teacher as an exclusive thing, but I decided to pursue it strongly. It’s been something that felt so right that I don’t feel obligation at all. It resonates at the deepest level of me.

What’s your history with music?

When I started practicing yoga, at the end of class I would feel both exhilarated and exhausted. That had a real visceral, bone-deep memory in me. It reminds me of dancing, and the feeling of being home in my heart from listening to music.

So, for me, when I started teaching yoga, it was a natural thing to be thinking about how yoga and music are related.

What kinds of yoga music do you seek out?

I’m more of a non-traditionalist. There is this thing called ‘yoga music’ that is very ambient and soothing and there is a certain healing or meditative quality to it, it’s very soft. That’s a really wonderful and amazing vibe to have in the yoga class. The more I teach yoga, the more I am sensitive to that and bring it in.

However, there is a lot to be said to having some more familiar, popular, or atypical Western music in yoga class, since this is where we’re practicing right now.

When I first started teaching, I wanted to do these music yoga classes. I wanted to take the bands that have influenced so many people, and put them to a yoga sequence to combine the experience of yoga and music.

The first yoga music class was to the band Phish, since my deepest love of music and dancing is through them. I started a Phish Yoga class. It’s totally taken off and there are teachers across the country now teaching it and raising money for charities.

Then I moved into more mainstream things. I have done Michael Jackson Yoga classes, Madonna Yoga classes and Pink Floyd Yoga classes. There’s a lot of yoga and music going on at festivals with DJ’s, but I sometimes think that there’s not enough explicit thematic connection between the two.

I try to choose artists who have had a big impact on people, because it creates nostalgia in the heart of the person while they’re moving their body. When you’re moving your body in an intense and conscious way and the vibration of music is meaningful to you, it can be a powerful interaction and deepen the practice in a way.

What do you feel about vocals or instrumental or electronic? What kind of mood do you want to set in a yoga class?

I am for equal opportunity in that way. I think all can be done well. It’s good to have a mix.

If you’re bringing the music to the forefront, then it’s important to be conscious of the mood you’re setting, to be thoughtful of the music you’re choosing, and to have some amount of relationship between what music you’re playing and what is happening in the class.

The biggest thing is, know the music. Don’t put on music that you don’t know where the song’s going. It’s important to know your songs.

So instrumental music, vocals, electronic are all fair game. They just need to be chosen with consciousness.

Have you had any missteps in your yoga class music selections?

I know a situation that happens sometimes when you forget the playlist in a certain way and you have to run over and shut it off.

In the beginning, I was playing Olivia Newton John. While ‘Hopelessly Devoted to You’ was related to the yoga class, it didn’t quite work.

Are there any free online yoga music streaming or download websites that you recommend?

Spotify has a treasure trove of online music, which can be free or paid. I know there is a big, new music streaming website that is pay-only called Beats. I am not a Pandora guy. I don’t like the commercials and I don’t trust their computer recommendations.

What do you think is the best online resource for yoga music downloads?

Yogi Tunes is a fabulous download site. It is paid, but they really have a vast array of all kinds of music related to yoga, both in the traditional music and branching out into other styles. They run the gamut from electronic to Eastern to ambient to rock n’ roll and soul and funk. Yogi Tunes is one of the primary and leading yoga music websites. They’ll construct playlists and send a set each month to you if you’re a member.

They also have yoga teachers choose a playlist from the music on their site. I’ve done that in a past. There are probably 100 different yoga teachers who have done that on there. These are mindfully pre-made playlists, but you can also download song singles.

Have you ever had live music in yoga classes?

Yes! I love teaching with live music. I’ve recently collaborated with an amazing musician named East Forest (Trevor Oswalt) who makes gorgeous ambient electronic music and we have really connected and plan on working together more. I have had harmonium players and guitarists and worked with other DJs as well. DJ HyFi is a great guy who centers his playing in the yoga world. I am really excited to teach with DJ Drez this summer at Yoga Rocks the Park (in Laurelhurst Park). I feel he is the epitome of the yoga DJ, he is the most tasteful DJ and always fits the mood perfectly.

Alex King Harris of the Desert Dwellers, who started Yogi Tunes, moved to Portland temporarily, and he played live for one of my classes. He’s worked with great yoga teachers like Elena Brower and Bryan Kest. He was in LA when yoga was blowing up in the early 2000’s and he was in the cutting edge at the beginning of the yoga music scene.

We did a class together, doing something called the Lotus Sessions, which he named. There isn’t a taught class, but there’s live music and you come and practice and let the live music guide your practice. I hope we get to do it again.