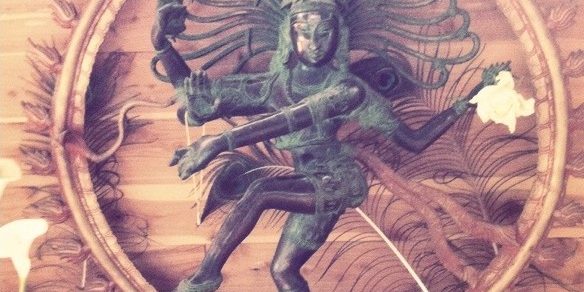 Have you had a chance to check out the statue, or “Murti”, in the front of the bamboo room at Yoga Union?  Perhaps you’re like me and you’ve used it as your focal point during a difficult balance sequence but don’t know much about it. In order to appreciate more than just the beauty of the murti itself, I asked Todd to answer a few questions about the dancing deity he chose for his studio.
Q: Who and what is being depicted?
A: The statue or “Murti” depicts Shiva in his form as Nataraj, the cosmic dancer. Shiva is divine consciousness and his dance, called the Ananda Tandava or “blissful dance”, creates the entire universe. The symbolism reveals to us that the universe is a divinely blissful dance of consciousness in which no individual is separate. We are both engaged in the dance, as Shiva is, and we are also the dance itself.
Q: What made you choose this particular statue?
A: The sheer beauty of it is honestly what first drew me to the Nataraja.
Q: What significance does it hold for you and the studio as a whole?
A: This particular depiction of Shiva is probably the most relative to yogis who practice “asana” or physical yoga poses. The statue has movement and life in it. In fact, it is actually placed in a yoga pose, so it’s a good fit for the yoga studio. The symbolism it presents also has a lot to teach us about being graceful in our practice. Shiva’s standing on one foot atop a dwarf who symbolizes our ego. It is this ego that keeps us small by insisting we aren’t worthy, don’t have enough, aren’t ready yet, or haven’t earned the right to be all that we can be. Here we learn here what’s required is to squash that limiting voice in our head and to transform the ego from a problem, as Shiva did the dwarf, into the actual stage we dance all over. The other foot is the graceful upturned foot which symbolizes revelation- that through yoga we embody the power of grace and our true nature is revealed; joy, goodness, delight, fun. We are never more ourselves than in that enrapturing moment of blissful dance; when we’re in the zone so to speak.
Q: What do you want your students to gain from it?
A: Primarily that life is a dance and that like all dance, it’s primary purpose is to delight in life.
Q: Any other fun facts in regards to Nataraj?
A: One of our teachers, John Friend (Anusara Yoga founder), has called his tour this year “Dancing with the divine.”