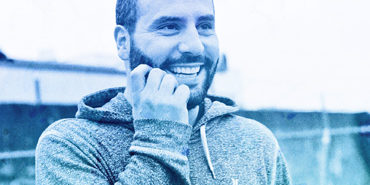 Sunday  was Father’s Day and even though some of us were not able to spend it with our dads, we were lucky enough to set our intentions for them in the Anusara class led by Chris Calarco. The practice felt particularly special that morning- maybe it was because we were getting to share our gratitude for life with a room full of yogis who also have fathers that helped them get to where they are today. Or maybe it was because Chris’s parents were visiting from the East Coast and were in class with us, beaming with obvious pride and love for their son. Or perhaps it was the deeply personal and insightful guidance given by Chris himself. Using the principle of Inner Spiral as a theme, he led us through an inspiring physical practice while sharing his struggles and triumphs with his own Inner Spiral. This principle has had such an effect on Chris he wrote a piece about it and graciously shared some of his writing in class.

His message has become widely popular (!Go Chris!), and can be read on the Wanderlust Blog page  among others.

So for those who were in Chris’s class yesterday and want to be inspired by the whole article, or those curious about Anusaras 3rd principle of alignment,  please enjoy Chris’s story below 🙂

And take a minute to check out his website (http://chriscalarcoyoga.com/) which has details about the upcoming July 23rd Yoga Groove- a class that unites yoga and music, with a dance party to follow. Mark your calendars, you won’t want to miss this party!

I had been practicing yoga regularly for about 5 years…

I was certified to teach Vinyasa and loved the feeling in body and mind yoga produced. I thought of this feeling as a combination of exhaustion and exhilaration. I sought it out whenever I could fit my practice into life as a child psychotherapist. However, without warning, my motivation to practice fell off the face of the earth as I lost my way. For almost 9 months my whole being shifted and I lost touch with my body, my friends and my practice. Even before yoga came to an abrupt halt I had gradually, and unconsciously, migrated away my first teachers and their studio. I hadn’t found a new studio per se but lived as more of a yoga vagabond, wandering from studio to studio with my head down, practicing hard and then quickly getting out the door. I wasn’t a very social yogi. Around the time I became a nomad, my teacher’s, Annie Adamson and Todd Vogt of Yoga Union in Portland, Oregon, were beginning to integrate Anusara Yoga’s 5 Universal Principles of Alignment into their classes during their process of training.

Upon deep self-reflection, a hefty dose of depression, and a lot of help I finally returned to the mat, making a massively liberating decision to commit myself fully to the practice and teaching of yoga. As I became reacquainted with my body I soon found myself bound and stuck in common poses like Trikonasana (Triangle) and Utthitha Parsvokonasa (Extended Side Angle). I was disappointed that after 5 years, even given the layoff, I remained shallow in my Triangle with bottom hand just below my knee. Athletic but never super flexible I felt a sense of resignation, as if I had reached my edge in asana practice and I would not grow. I knew I could always access the good feeling after a class but deep inside this was not enough, I longed for much more. I wanted access to advanced poses, I wanted to increase my strength and flexibility but most of all I yearned to change my habits of mind and magnify my life from within. I left yoga because of depression and was determined to make a resonant and permanent change.

I scheduled a private lesson with Annie and expressed my frustration with Triangle and Extended Side Angle. Quickly, I found Anusara’s third principle of alignment was going to be my new intimate dance partner. Inner Spiral is an “energy spiral” thought of as a refinement of the body’s alignment in all yoga postures. The spiral begins on the inner edges of the feet and widens as it moves upward toward the pelvis and outer edges of the waistline. Inner Spiral turns the front of the legs and pelvis inward, towards the midline. It moves the inner edges of the feet, legs, and pelvis backward as the inner heels, inner knees, and inner thighs flow back. These actions also broaden the legs and pelvis apart. Inner Spiral’s key words are “In”, “Back”, and “Wide”. Physically, this manifests an increased healthy curve in the lower lumbar spine and the sitting bones press out. Renowned teacher Sianna Sherman often half-jokes that one of Anusara’s secret principals is “when in doubt, stick it out”.

Importantly, Inner Spiral requires the engagement of its partner principle, Muscle Energy (Anusara’s second principle), to be radically transformative. When the muscles of the legs are engaged and we actively make them flow “In”, “Back”, and “Wide” there is integration throughout the entire lower body that creates vibrantly new ripples of freedom in the groins, hamstrings, and lower back. Within the first ten minutes of my private with Annie I looked into the mirror and was astounded. I did not recognize the person in Triangle pose. My stance was wider and more stable, my bottom hand was on the floor (Hallelujah!), and I felt a lusciously deep stretch in my groins and lower back. Now I had to begin working with Inner Spiral and all five principles in every pose! The work had beautifully just begun.

In Anusara’s methodology, each Universal Principle of Alignment is associated with one of earth’s natural elements. Inner Spiral is like water. Just as rivers flow naturally, nurturing the surrounding land, Inner Spiral watered the seed of each asana inside my body. With active engagement, Inner Spiral created a new sense of liquid depth in me and in turn granted access to the freedom and revelation l longed for. I no longer am a yoga vagabond as I have found a home inside my body and with Annie and Todd at Yoga Union. I am expanding my limits, working at my edge, and nailing postures I never imagined. Inner Spiral has literally blasted me open to the new possibilities that are always available if we align heart, body, and mind. For me, the body came first, and the others soon followed suit. Feeling extraordinarily liberated and full of deep gratitude for my fellow yogis, teachers and this system of yoga, the journey continues. Inner Spiral changed my life and it can change yours.

Chris is certified at the 200 hour level through Yogaworks NYC in an aligned Vinyasa style and credits his teacher there, Jeanmarie Paolillo, with schooling him in the classical yoga tradition. Since beginning Anusara Yoga studies with Annie and Todd at Yoga Union, Chris has been deeply moved by this tradition’s combination of therapeutic biomechanics and inspiring Tantric philosophy. In September 2011 Chris completed a 100 hour Anusara Immersion with Sianna Sherman in San Francisco, and he will assist Sianna at domestic and international workshops beginning in 2012. Chris considers himself a yoga geek and has been fueled in his ever-evolving face-to-face and intellectual studies with John Friend, Rolf Gates, Annie Adamson, Jon Kabat-Zinn, Swami Chetananada, Christopher “Hareesh” Wallis, and others.