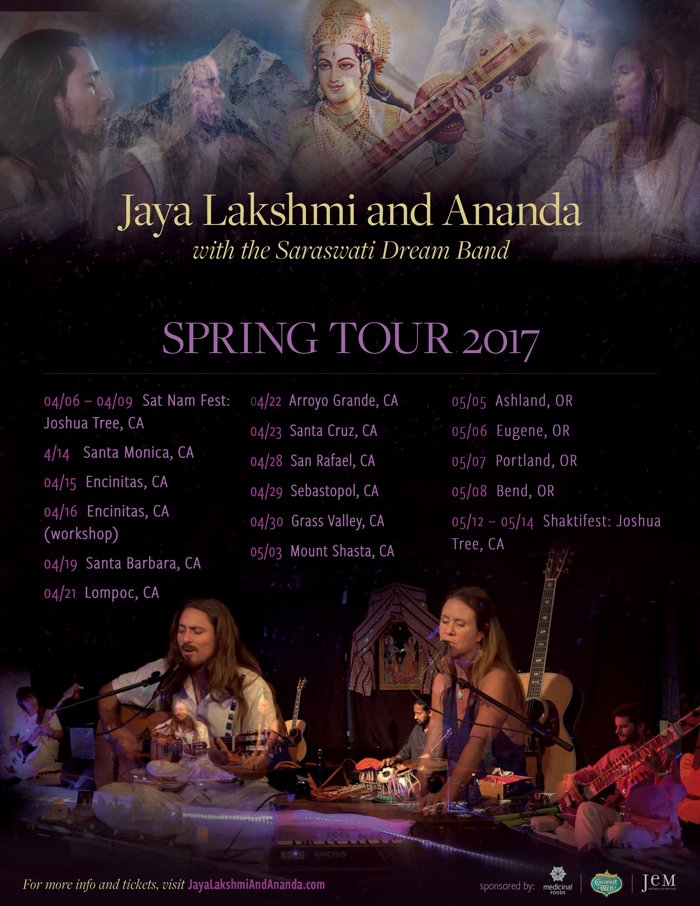 Join Jaya Lakshmi and Ananda with the Saraswati Dream Band for a sensational night of music, chanting and connection. The tour celebrates the release of their brand new live albums called “The Live Experience”. They are a mixture of the best of 5 different shows from 2016’s tour with the Saraswati Dream Band. In addition, the live cds correlate with DVD and BluRuy releases. They will be available at their tour prior to their official release. Be the first to get them at their shows or at their store here.

We will be needing lots of volunteers for this event. Please message Amy Dennison, our volunteer coordinator if you would like to help out in exchange for a free evening pass. Her email is: sweet4tater@yahoo.com.

Jaya Lakshmi and Ananda are Oregon based musical artists in the genre of mantra music. They offer a combination of kirtan (call and response singing), bhajan (devotional hymns) and original singer/song writer compositions in the languages of English, Sanskrit and Gurbani. Alternating guitar, harmonium, keyboard, bansuri flutes and vocal weaving, they create a profound healing and balanced sound current (Naad) brimming with bhakti (devotion). The Saraswati Dream Band includes Ankush Vimawala on tabla, Will Marsh on Sitar and guitar, and Richard Cole on bass.

Jaya Lakshmi has been sharing her beautiful kirtans and bhajans for over 20 years. Steeped in the Gaudiya Vaishnav tradition (Radha Krishna bhakti path), she recorded her first four solo albums and toured mostly the west coast from 2000-2010. In 2010, a musical merging unfolded with Ananda Yogiji.

Ananda has been a dedicated practitioner and teacher of Kundalini Yoga as taught by Yogi Bhajan for sing 2007. He also completed and taught at numerous holistic yoga and leadership immersions at the Dharmalaya. (Dharmalaya is a holistic yoga, permaculture and meditation center in Eugene, Oregon, that is part of Ananda Seva.) In addition to his BA in international and sustainable business, he has a minor in East Asian Religions and studied yogic philosophy at the University of Oregon.

In coming together with Jaya Lakshmi, their love, music and sadhanas (spiritual practices) spiraled together. Bridging not only the two traditions, they incorporated many other facets in the great wisdom and bhakti traditions of the Vedas. Included in their influences have been the great hugging saint Amma, Paramahansa Yogananda, the Dalai Lama and many more.

Since 2010, they have released 4 albums on Sounds True as well as 6 independently. They tour nationally and internationally holding their own events and retreats. They currently have established a soul friendship relationship rather than the former intimate one. They have been pioneers in bringing music and conscious businesses together, especially on their USA west coast tours. Their sponsors this year include Coconut Bliss, Jem Organics, and Medicinal Foods.

Will Marsh graduated from the prestigious guitar program at Interlochen Arts Academy in Michigan. He then went on to study guitar and sitar at the California Institute of the Arts in Valencia, CA. Will studied sitar under master teachers Ustad Aashish Khan and Roshan Bhartiya.

Ankush Vimawala studied tablas growing up in Gujarat, India and was awarded several gold medals for his Visharad (BA) degree in tabla, by the “Bruhad Gujarat Sangeet Samiti”.

Richard Cole has been playing bass for over 30 years and has toured in varying eclectic bands in Europe and North America. He currently is living in Ashland Oregon with a devoted Tai Ji Quan martial arts practice.

Many of you are on your knees at this time. Strugg

As of Tuesday, March 17, the doors of Yoga Union C

“Cleanliness, from a yogic perspective, doesn’

What practices help you show up centered and ready

Togetherness and unity. 🤝 Each individual is a

Peace is the product of listening and feeling. D

Healing doesn’t happen in a vacuum. It happens w

What energies are alive in you right now? What’s

What are you going to do today to open yourself to

No human can discover their potential without a co

Thanksgiving yoga class 2019. We are so blessed to

A fond farewell to Em. After six years teaching,

May all people be blessed with the generative powe

This is a space to come together, not just despite

You're committed to healthy choices for your body

Now you can enjoy live classes with your favorite Yoga Union instructors from the comfort of your own home!

We’re offering a full schedule of live classes, as well as a growing library of pre-recorded classes you can take any time.

We are so grateful to be able to continue serving our community.

To our family, stay safe, and stay centered.